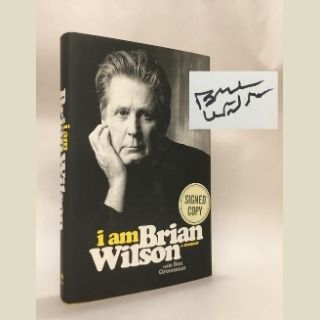 A collector recently asked me about an autopen signed copy of Brian Wilson's memoir I Am that I was offering. Some copies of the book came with a "signed" sticker on the cover, which was very exciting for fans of the Beach Boys. But excitement quickly turned to disappointment when people started to discover that the signatures looked too much alike.

It turns out that someone (Brian Wilson or his publisher) used an autopen to sign books. An autopen is just what it sounds like, a robot that signs autographs. The knowledge that a machine "signed" the books rather than Brian Wilson himself spread quickly online and now many collectors doubt the authenticity of signed copies of I Am.

As with most things in life, the situation is more complicated. It seems that Brian Wilson signed many of the books, just not all.

Several years ago, I ended up with some autopen copies and since then I have been collecting examples of Wilson's signature from copies of I Am Brian Wilson with the signed sticker on the cover.

That is the autopen example you can find easily on the Internet. I have identified a likely second autopen version:

I recently talked with a representative of an autograph authentication company, and he told me that the most autopen masters they've seen for one signing is six, but usually there are just a couple. So there may be more out there that I haven't seen yet.

However, there are some guidelines for identifying autopen signatures.

They are made by machines that typically use constant pressure and an even pen stroke. Real signatures tend to vary a lot in the mechanics of how they are made, not just in the shape.

Here is an example of a what I think is a real signed I Am Wilson. The signature pressure is very uneven, which can be seen on the front, but since the books were signed with felt pens, it's much easier to photograph the uneven bleed-through on the back of the leaf.

The signature also fades out at the end, the sign of a human - compare that with the solid, even pen stroke of the autopen, robotic examples.

See if I have a signed copy in stock.