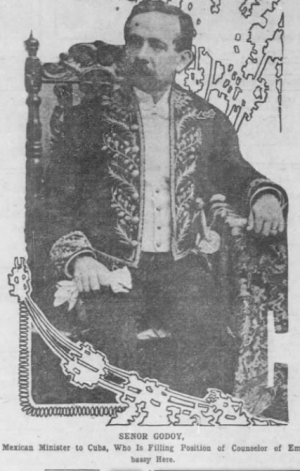 a work in progress

José Francisco Godoy (1851–1930) was the most prolific Mexican American author of books in the late 19th and early 20th century. Yet other than a brief entry on Wikipedia, he seems to be virtually unknown among the scholars working to recover the US Hispanic literary history.

He was the first Latin American to write a mystery novel (1883) and only the second Mexican American to publish a novel in English in the US. He also wrote a Spanish language visitor's guide to San Francisco in 1890, which was "published" in Mexico, but printed in San Francisco where Godoy lived for many years. He wrote a legal treatise on extradition, several reports on the expatriate communities in Mexico, and he compiled an international biographical dictionary in Spanish, which he self-published in Washington, DC. Godoy followed in his father's footsteps and edited at least three newspapers, in both English and Spanish.

Godoy was the second generation of a truly American family, whose members passed back and forth over national borders of the United States, Mexico, and Latin American countries for nearly a century. In the 1870s, Godoy won the contract to be the official state translator in California, a contract that his mother, Louisiana-born Adela (also referred to as Adelma and Adelina) Perrin de Godoy, won after his tenure ended. His mother's obituary notes that she was well known in San Francisco as a writer under the pseudonym, "Americana" (more research needs to be done to locate her writings). José Francisco's sister, Adele, was an actor and translator.

José Francisco's son Jorge (or George), born in San Francisco in 1892, became a journalist and self published two collections of poems by 1914, perhaps the first such books published in English by a Mexican American writer. His daughter Mercedes wrote a memoir in 1919. Another son, Adolf (Adolfo), copyrighted several plays in the US and later edited a Mexican movie periodical in Mexico.

As a young man living in San Francisco, José Francisco Godoy passed the bar, probably as a self-taught lawyer. He wrote in a short biography that his father's sudden death interrupted his schooling at 18 (Who's Who, 1920). But if he lacked a college education, he thoroughly enjoyed literary pursuits. He wrote several plays, a parody of Emile Zola, and then a comic novel, Who Did It? The Last New York Mystery (San Francisco: Bosqui Engraving, 1883). The novel is a send up of dime novel conventions, written with many colloquialisms and mockery of high society. The family at the center of the book, the Fustians, claim descent from the Mayflower, but the narrator sardonically notes that their original American ancester had been a servant. The mystery, featuring police officer Clubready and private detective Sureclew, involves a murder, an heiress, and a love triangle. Conventional stuff, except that the murder victim is a house cat.

In 1890, Godoy was in Mexico City publishing El ferrocarril, which claimed to be the only bilingual Spanish-English daily newspaper in Mexico. As a premium for subscribers, Godoy offered a guidebook to San Francisco. Up to that point, a handful of guidebooks had been published for Spanish-speaking travelers to US cities, but Godoy's work is one of the few after the Gold Rush to focus on the West Coast. He explains the city to his Mexican audience and apparently produced the work at considerable expense. Typical of such works, he re-used a few previously published illustrations, but most of them are fresh and bright, suggesting they were engraved for that book.

At the end of the 19th century, Godoy was back in the United States, working for the Mexican embassy. He and his family were noted in Washington, DC society for many years. During his stay in the national capital, Godoy published another expensive and idiosyncratic work, Enciclopedia biografica de contemporaneos (Washington, DC, 1898), an illustrated international directory of prominent men written in Spanish.

At the end of his life, Godoy retired to Mexico where published collections of biographies of Mexican historians, architects, and engineers who were "gone, but not forgotten." 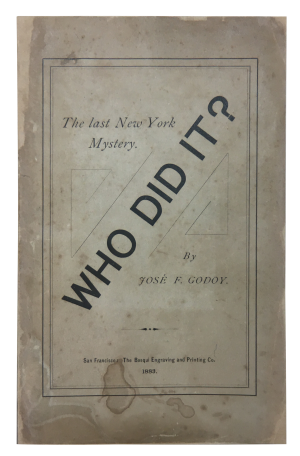 Chronology of the Godoy Family

(Links to Ancestry.com and Newspapers.com may require subscriptions to view)

1849 (June 15) - José Antonio and J. R. Carreras begin publishing the daily Spanish-language newspaper El telégrafo in New Orleans. It was "a sheet devoted more particularly to that part of our population who are of Spanish origin." [New Orleans: Times-Picayune, 07 June 1849]

1858 - José Antonio is pubishing El heraldo in Veracruz, Mexico and runs afoul of government officials who fine him and shut down the paper. [New Orleans: Times-Picayune, 11 June 1858 (afternoon)]

1858 (June) - José Antonio starts the Aurora, a non-political newspaper in Veracruz, which is also closed by Mexican authorities after one issue. [New Orleans: Times-Picayune, 11 June 1858 (morning)]

1859 (May) - José Antonio, identified as the editor of El heraldo and the Aurora, is reported to have taken over the Veracruz newspaper, La reforma social. He is also reported to have an American wife: "Sr. Godoy is a fluent writer, a true admirer of American institutions, as evinced by his having a Creole of New Orleans to wife." [New Orleans: Times-Picayune, 14 May 1859]

1865 (April) - US recognizes José Antonio as the rightful representative of the Mexican government. At the time, there were rival presidents in Mexico. Godoy represented the Benito Juarez government. [Sacramento Bee, 01 April 1865]

1869 (29 September) - José Antonio dies of a heart attack at an event in honor of former Secretary of State William H. Seward. He left a wife and two children. [San Francisco Examiner, 30 September 1869]

1873 (May) - José Francisco is president of the Demosthenic Literary Society. [San Francisco Examiner, 23 May 1873]

1875 - José Francisco translates the libretto of the Spanish opera Marina by Francisco Campodron and Emilio Arrieto. The opera debuts in New York on November 8. The English libretto is published in San Francisco by B. F. Sterett. Full text online. Report of performance in the New York Times, 9 November 1875.

1875 - José Francisco translates the libretto of the Spanish opera Robinson Crusoe by Francisco Asenjo Barbieri and Rafael García y Santiesteban. The opera is performed for one night only in New York (New York Daily Herald, 14 November 1875). Published in San Francisco by B. F. Sterett.

1876 (February) - José Francisco wins his second state contract to translate California laws into Spanish. His appointment generates some controversy. [Sacramento Bee, 12 February 1876] [Minority Report of the Joint Committee of the Senate and Assembly on the Translation of the Laws into the Spanish Language]

1877 - José Francisco is one of the original incorporators of the Sociedad Espanola de Beneficencia Mutua. [San Francisco Examiner, 6 February 1877]

1879 - José Francisco publishes The American L'Assommoir: A parody on Zola's L'assommoir under the pseudonym Joseph Sydney. Philadelphia: T. B. Peterson, 1879. After María Amparo Ruiz de Burton's Who Would Have Thought It? (1872), this is the second earliest novel by a Mexican American writer. Advertised here. [Source: Who's Who in America, 1920]

1880 - José Francisco generates criticism in the San Francisco Chronicle for the "ante-nuptial offense" depicted in his play "An Orphan of the State."

1882 (March 11) - José Francisco marries Adela Perrin. (Yes, it is strange that she has the same name as his mother). [Marriage notice]

1887 - Adele Josephine Godoy (José Francisco's sister) translates The Martyr of Golgotha: A Picture of Oriental Tradition from the Spanish of Enrique Pérez Escrich. Full text online. Earlier that year it was reported that she had a contract with the same publisher to translate a Dutch novel (she was living in Amsterdam), but that book does not appear to have been published. [Source]

1888 (February 24) - Death of Adela (Adelma, Adelina) Godoy, widow of José Antonio, in Amsterdam, Holland, where she moved to live near her daughter, Adele. "The deceased lady was well known here. She was for three years State translator, translating the California laws into Spanish. She was also a distinguished writer and her nom de plume "Americana" was at one time quite famous." [San Francisco Examiner 17 Mar 1888]

1909 - Son Alberto copyrights the play, Charity: A Comedy in Three Acts from the Spanish of Miguel Echegaray [Copyright record]

1910 - Son Alberto copyrights a play, The Hoodoo: A Farcical Comedy in Three Acts from the Spanish by F. Lumsden Hare and Albert L. Godoy. At the same time, Albert copyrighted his father's play, An Orphan of the State. [Copyright record] [Copyright record]

1919 - Daugther Mercedes Godoy publishes, in English, When I Was a Girl in Mexico, possibly the first autobiography of a Mexican woman. Boston: Lee, Lothrop & Shepard, 1919 [Source] 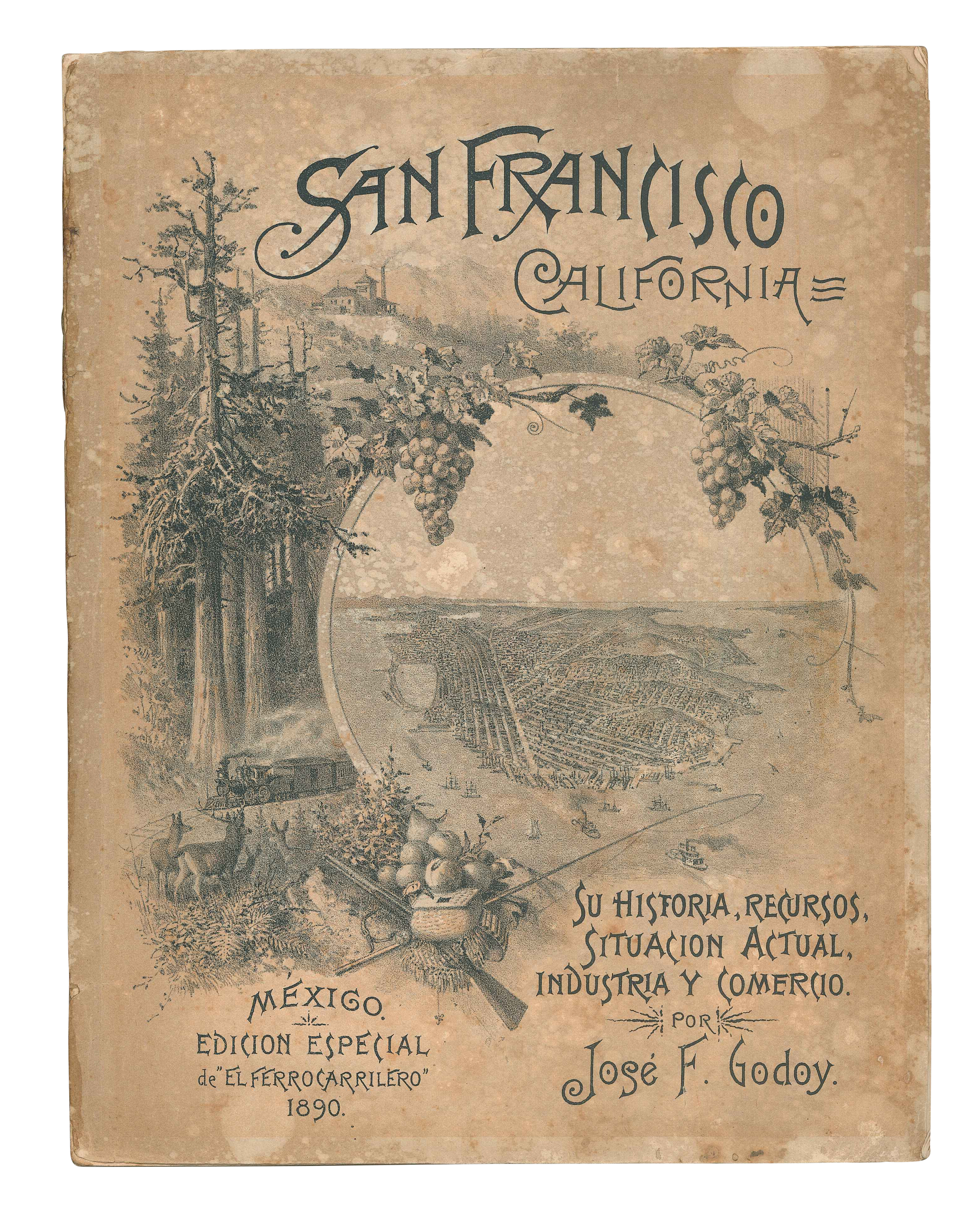 "An Orphan of the State" (play). San Francisco: Baldwin's Theatre, 1880 (unpublished?). This is Godoy's adaptation of Adolphe d'Ennery's Les deux orphelines under the pseudonym Mr. Sydney-Hoey. The San Francisco Chronicle criticized the play for its depiction of an "ante-nuptial offense." [Reference] [Reference] [Who's Who] [Copyright as J. Sydney]

The American L'Assommoir: A parody on Zola's L'assommoir by Joseph Sydney (see Who's Who). Philadelphia: T. B. Peterson, 1879

Los hombres prominentes de México. Les hommes éminents du Mexique. The prominent men of Mexico by Ireneo Paz (Spanish text), J. L. Regagnon (French text), and José F. Godoy (English text). México, Impr. y Litografía de "La Patria", 1888. This may have been a project of the Associated Press in Mexico, of which Paz was president, Godoy was secretary, and Regagnon was a member.

The legal and mercantile handbook of Mexico by A. K. Coney and José F. Godoy. Chicago : Pan-American Pub. Co., 1892

The case of the Pious fund of the Californias. United States of America vs. the Republic of Mexico. Mexican call for discovery. (N.-pl.): (n.p.), 1902

* The fact that José Francisco Godoy's wife and mother had the same name (Adela Perrin) suggests they were related. His mother was described as a Louisiana Creole, which likely means of French descent. José Francisco's sister Mercedes married José Tauzy (José is both a French and a Spanish name; he also went by Joseph in San Francisco directories). Mr. Tauzy was a foreign-language (especially French) bookseller in San Francisco who operated as J. Tauzy & Co., Carvajal and Tauzy; and Tauzy & Levy. So perhaps the Godoys were also part of the French community in San Francisco. Mr. & Mrs. Tauzy moved to France sometime after 1904.