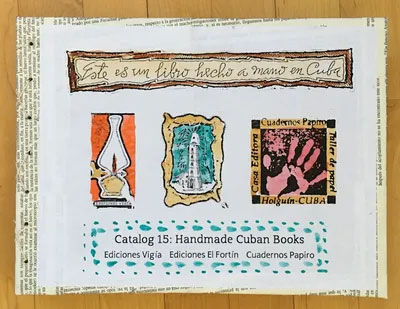 A 320-page catalog of more than 300 handmade books from Ediciones Vigía, Cuadernos Papiro, and Ediciones El Fortín over the last 30 years.

Short videos of individual books are available on my YouTube Channel.

Of the three publishers, Ediciones Vigía is the oldest—established in 1985 by Alfredo Zaldívar and Rolando Estévez—and the best known inside and outside of Cuba. It has been the subject of exhibitions in many countries and even a monograph in the US, the recently released Handmade in Cuba.

Estévez, a set designer by profession, established the design aesthetic for Vigía. A large group of writers, artists, and artisans in the Vigía circle collaborate to publish hundreds of individually designed, and hand assembled books.

Typically, one artist creates a maquette for a book and then a group of artisans will figure out how to replicate the design 200 times. Most early Vigía books had print runs of 100 and later 200 copies, because that was as many as it was possible to produce before the mimeograph masters wore out, a tradition that continued after new printing technology was acquired.

While Ediciones Vigía has published many well-known writers from Europe and the Americas, it has retained its focus on the community of writers in and around Matanzas. Few publishers anywhere have produced so many literary books by regional writers and Vigía’s local emphasis is unparalleled among the makers of artist’s books.

Ediciones El Fortín is a spinoff of Vigía, founded by Estévez in 2014. This new Matanzas imprint claims to be based in “Bellamar”, which means “lovely sea.” Bellamar is intended to counter the violence implied by naming a city Matanzas, which might be translated as “Murderville.”. El Fortín produces books in small numbers, usually fewer than 50 copies, with elaborate structures and packaging. While Fortín books are much closer to Estévez’s one-of-a-kind book-art pieces than the typical Vigía title, they also make extensive use of Vigía-style handcoloring and paper and fabric collage.

Cuadernos Papiro started as a papermaking collective in 1994 and began publishing books in 2001 under the direction of Tatiana Zúñiga Góngora and Manuel Arias Silveira. The press is in Holguín, on the opposite end of the island from Havana. Cuadernos Papiro (whose name translates as papyrus notebooks or papyrus quartos) makes all its own paper from recycled materials. Its founders obtained a linotype machine so they could print all their books with lead type. A dedication to obsolete equipment is central to Papiro’s vision. Most of Papiro’s books are illustrated with relief prints, most often linocuts and collagraphs. 44 pages. 8-1/4 by 12-1/4 inches. Published in an edition of 100 copies. A collection of patriotic poems printed letterpress on handmade paper and bound using silver cord. Some of the poems are printed over a linocut of a palm tree scene. The image, by Freddy García Azze, is repeated on..... 26 pages. 9-1/4 by 10-1/4 inches. One of 200 copies. Colección Venablos. Literary criticism; text mimeographed from typescript, with a mimeographed reproduction of a portrait of Paz. The size of this book suggests some interesting questions about its manufacture as the dimensions of the sheets (9 inches wide) exceeds the standard..... 43 pages. 8-1/2 by 8-3/4 inches. An edition of 200 copies. Colección del San Juan. The author's second book with Ediciones Vigía, a mimeographed collection of poems, designed and illustrated by Ariel López Gónzalez. While not noted on the colophon, it appears that this edition was signed by the author on..... 5 leaves. 7-3/4 by 10-1/4 inches. One of 50 copies. Colección Puente de Hierro. An artist's book designed by Rolando Estévez and inspired by the poetry of two Latin American Jewish poets. Agosín is a noted Chilean-American writer; Glantz was a Mexican poet who wrote in Yiddish. The text is digitally..... 31 pages. 6-3/4 by 8-1/2 inches. One of 200 copies. Colección Clásicos. A collection of poems translated from the Russian into Spanish by Juan Luis Hernández Milián especially for this edition. The text is mimeographed from typescript onto pink paper, with collage section dividers and illustrations after Modigliani. Designed by Alfredo..... 12 leaves, including covers. Largest dimensions, 13-3/4 by 8 inches. Published in an edition of 100 copies. The sheets comprising this book are die-cut handmade papers, including sheets made with flower petals, garlic leaves, recycled newspapers, and the hair of Leticia Leyve Azze, the designer. One of the sheets is marbled..... Two small rolled broadsides in a paper box. The box measures 5-1/2 by 5-1/2 by 1-1/2 inches. One of 100 copies. The two scrolls are printed with the same poem, once in Spanish and again in English translation. Each roll is tied with a ribbon. The colophon is printed and mounted on..... 7 leaves, plus covers. 9-1/4 by 11-1/4 inches. One of 200 copies. One of the first books of the press, a collection of poems printed letterpress on handmade paper. The decorations are made from thin bits of wood, jute twine, and leaves affixed to the pages and some prints made by..... 99 pages, mimeographed on one side of each sheet only. 6-3/4 by 9 inches. One of 200 copies. Colección del San Juan. This is perhaps the most emblematic of Rolando Estévez's books for Ediciones Vigía during the mid-1990s, as the Cuban economic Depression (called the Special Period) began to recede. The..... Pergamino (folded broadside). 7-1/2 inches by 45 inches. One of 200 copies. Colección del San Juan. A horizontal pergamino, sometimes referred to as a "plegable", which translates as "folding" but used as a noun. This pergamino variant is much less common than the vertical, hanging structures favored by the press. The..... A three-sheet pergamino (folded broadside). 11 by 40 inches unfolded. An edition of 200 copies. Colección Inicios. The designer behind Ediciones Vigía and El Fortín, Rolando Estévez, has interpreted the work of the Matanzas poet Digdora Alonso (1921–2007) more than any other writer. This text, while called a story, is actually..... 8 pages. 6-1/2 by 7 inches. An edition of 70 copies. Colección del San Juan. Two versions of a short poem found among Alonso's papers after her death. This chapbook is designed and illustrated by Rolando Estévez with a dried flower mounted to the front cover. Alonso is one of Estévez's..... Pergamino (broadside). 5-1/2 by 9-1/4 inches. Edition size note stated. A mimeographed announcement for an exhibition of ten works by a Cuban textile artist. The announcement, printed on Kraft paper with a handcolored illustration, consists mostly of a list of the names of the pieces. OCLC: No holdings. Fine. 10 pages. 6-1/4 by 8-1/2 inches. An edition of 200 copies. Colección del San Juan. A long poem, winner of the Premio América Bobia 2013. The wrappers are covered with cloth and illustrated with cardboard, handcolored paper collage, twine, and a key. Designed and illustrated by Elizabeth Valero. OCLC: BLSTP BNCJM CLU..... 19 pages. 7-1/4 by 9-3/4 inches. One of 50 copies. Colección Puente de Hierro. The cover includes a naked female doll, described on the colophon as a socialist Barbie made in China ("una barbie socialista realizada en China"). This is a collection of poems in Spanish and English translation, about sexuality and..... 39 pages. 11 by 7 inches (oblong). An edition of 200 copies. Coleción del San Juan. Poems in Spanish and English translation by Pedro Pérez Oliva; photocopied on white paper. Designed and illustrated by Elizabeth Valero Molina with a motif of broken plates and buttons. The covers are made from cardboard..... 21 pages. 6-1/2 by 8-1/2 inches. An edition of 200 copies. Colección Barquitos. Two legends about water, photocopied from a computer-generated typescript on various colors of paper. Designed and illustrated by Ariel López González. The book was published in collaboration with the III Brigada de Cooperación de la Universidad de Lleida..... 10 pages. 8-1/4 by 6-1/4 inches (oblong). One of 100 copies. Colección Clásicos. Introduction by Teresita Burgos. This is one of several works in translation published by Vigía in 1989. Those books were reprinted with new designs in the 1990s; the original editions are scarce. The text is mimeographed on papel de.....