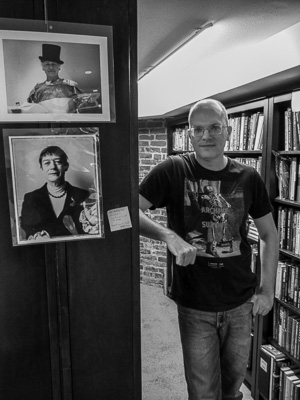 Scott Brown launched downtownbrown.com in 1996 and has been in the book trade full time since 2001. Along the way he was admitted to the Antiquarian Booksellers' Association of America (ABAA), he started and edited Fine Books & Collections magazine, and launched the National Collegiate Book Collecting Contest now run by the Center for the Book at the Library of Congress and the ABAA.

From 2007 to 2020, he co-owned Eureka Books, in Eureka, California. Scott and his wife, the bestselling writer and artist Amy Stewart, relocated to Portland, Oregon, in 2017, and Downtown Brown Books opened its doors on August 15, 2019.

Downtown Brown Books is a hidden bookstore in Portland's vibrant NW 23rd neighborhood (also called Nob Hill and the Alphabet District). The shop is in the basement of a Victorian building at the corner of NW 23rd and Quimby (have you ever wondered where Portland author Berverly Clearly got the name for her enduring character Ramona Quimby?). Montgomery Rare Books, another hidden Portland gem, is right upstairs.

During his career, Scott has acquired substantial portions of many retiring booksellers, including Peter Howard of Serendipity Books in Berkeley, the Americana specialist Peter Siegel, the beat books of Rick Gentry's Bohemian Books in Arcata California, a horror book store in Dallas, and several others.

He also acquired the bulk of the Harvard office library of Stephen Jay Gould, most of the book and record collection of the 60s poet and songwriter Rod McKuen, and the private library of actor and vocal coach Robert Easton.

He is always interested in buying interesting books and collections. Please contact Scott if you have books to sell.